Oryx and Crake – By Margaret Atwood 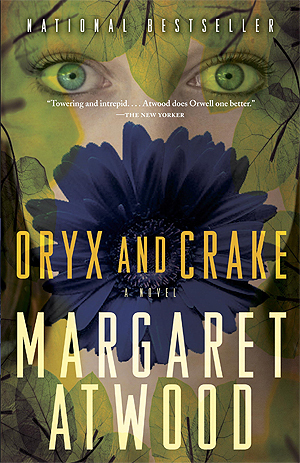 Goodreads Synopsis: Snowman, known as Jimmy before mankind was overwhelmed by a plague, is struggling to survive in a world where he may be the last human, and mourning the loss of his best friend, Crake, and the beautiful and elusive Oryx whom they both loved. In search of answers, Snowman embarks on a journey–with the help of the green-eyed Children of Crake–through the lush wilderness that was so recently a great city, until powerful corporations took mankind on an uncontrolled genetic engineering ride. Margaret Atwood projects us into a near future that is both all too familiar and beyond our imagining.

Oryx and Crake is a truly strange book. I’d read The Handmaiden’s Tale some years back and saw that this book is by the same author, and so decided to read it.

This book starts out sort of slow, it follows Snowman in the post apocalyptic version of our world.  Snowman is depressed, starving, and apparently the prophet for a small tribe of people.  The beginning of Oryx and Crake is slow. It flashes between present time and Snowmen’s memories of his childhood. And while this isn’t boring, it does feel like nothing is happening for awhile.

The book does eventually pick up. Snowman has to go out into the dystopian world to try and find more food for himself, he almost gets killed by pig-like creatures. In between this the flashbacks continue, showing Snowman when he was going to college, his friendship with the genius Crake, falling in love (or rather obsession) with Oryx.

Make no mistake this book is depressing as hell. Crake has some real problems, and he takes them out on the world and Oryx.  Snowman himself is also messed up, and yet somehow he ends up making it through the apocalypse. And most people are dead by the end of the book.

I never found myself caring for any of the characters, sure I felt pity for them, but I never wanted to cheer anyone on. Possibly Oryx the most, but she didn’t have as much of a part in the book as she could have.  In the end I gave this book 3 stars.