The Girl From Everywhere – By Heidi Heilig 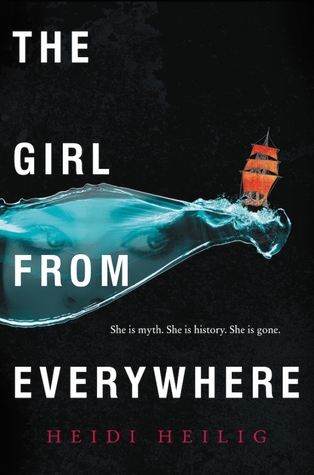 Goodreads Synopsis: Nix has spent her entire life aboard her father’s ship, sailing across the centuries, across the world, across myth and imagination. As long as her father has a map for it, he can sail to any time, any place, real or imagined: nineteenth-century China, the land from One Thousand and One Nights, a mythic version of Africa. Along the way they have found crewmates and friends, and even a disarming thief who could come to mean much more to Nix. But the end to it all looms closer every day. Her father is obsessed with obtaining the one map, 1868 Honolulu, that could take him back to his lost love, Nix’s mother. Even though getting it—and going there—could erase Nix’s very existence. For the first time, Nix is entering unknown waters. She could find herself, find her family, find her own fantastical ability, her own epic love.

Or she could disappear.

Find on Amazon and Goodreads.

This book was recommended to me by a friend, and I’m quite happy they did so. It was an interesting read.

The Girl From Everywhere takes you back in time to several different places, and is at times in the present day.  I loved the time travel, especially since they traveled by boat! I enjoyed the world a lot in the book. Though time travel took some explaining and was sometimes confusing.  I found that hard because I wanted to know everything about the world. But when it came time to teaching Nix how to travel, I found the explanation a little flat.

Nix herself is a great character. It’s very interesting because she’s part Chinese, and so the book deals with some racism, and I always like it when books work with realistic topics. I also enjoyed her stubbornness, her motivations, and her friendships.  It’s easy to sympathize with her. Her father is an abusive man, and I found myself wanting to stand up for her more than once.  I found it amazing that she is able to forgive her father in the end, I really thought that was admirable. For myself I couldn’t forgive his character, and still hated him at the end.
The other characters in the book are well written.  There is an unfortunate love triangle of sorts, which I thought was silly, but thankfully it wasn’t a major plot point.

I found the conclusion of the story just a bit too easy. I felt like the author desperately wanted a happy ending, and so because of this forced everything to come together in a way that wasn’t very realistic. I was a bit disappointed with this.  I also found the story just a little predictable.  Because of these I gave it 3 stars on Goodreads, but I definitely recommend it to people who love time travel.