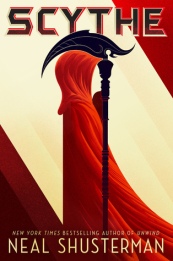 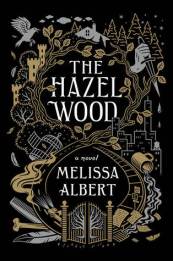 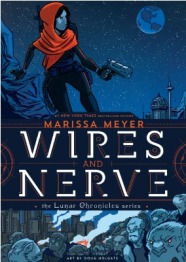 The Hazel Wood – By Melissa Albert:

Goodreads Synopsis: Seventeen-year-old Alice and her mother have spent most of Alice’s life on the road, always a step ahead of the uncanny bad luck biting at their heels. But when Alice’s grandmother, the reclusive author of a cult-classic book of pitch-dark fairy tales, dies alone on her estate, the Hazel Wood, Alice learns how bad her luck can really get: Her mother is stolen away―by a figure who claims to come from the Hinterland, the cruel supernatural world where her grandmother’s stories are set. Alice’s only lead is the message her mother left behind: “Stay away from the Hazel Wood.”
Alice has long steered clear of her grandmother’s cultish fans. But now she has no choice but to ally with classmate Ellery Finch, a Hinterland superfan who may have his own reasons for wanting to help her. To retrieve her mother, Alice must venture first to the Hazel Wood, then into the world where her grandmother’s tales began―and where she might find out how her own story went so wrong.

The Hazel Wood was supposed to be creepy and thrilling, but overall I found it to be a pretty dull book that was weird in some parts. But never once creepy.  The story follows Alice, whose mother has been kidnapped. Alice is a nondescript character, seemingly patterned after every YA heroine ever.  Finch is like every other YA boy, seemingly in love with the main character for who knows why, and has a controlling personality that borders too close to manipulative for my liking.  The hazel wood itself, and the Hinterlands were weird I guess, but I never found myself on the edge of my seat waiting to see what happened next. Instead I was just waiting for the book to be over already. The one thing I liked was the author’s idea and prose. I think that I would be interested in other books by Melissa Albert, but sadly this one was not for me. Thank you to NetGalley for giving me a copy of this book to review. I gave this book 2 stars on Goodreads.

A world with no hunger, no disease, no war, no misery. Humanity has conquered all those things, and has even conquered death. Now scythes are the only ones who can end life—and they are commanded to do so, in order to keep the size of the population under control.

Citra and Rowan are chosen to apprentice to a scythe—a role that neither wants. These teens must master the “art” of taking life, knowing that the consequence of failure could mean losing their own.

I was really excited to read this book, having had it on my TBR for quite awhile. Sadly it did not live up to my expectations. To start out the world is very confusing, and once it starts to explain itself it doesn’t get better because…It just wasn’t believable. In what world would people allow other people to become scythes and kill in order to control the population. If there had been a form of voting for new scythes I would have found this story a little more believable, but as it was I just couldn’t get behind the story because it made no sense.

It took me till about 35% into the book before I started to enjoy the story, but as soon I as did the author threw in a romance subplot between Citra and Rowan. And that completely killed the rest of my interest in the story. The two kids had no chemistry, and on top of that I never could see what they were building their love on. Mutual attraction? There wasn’t really much of this mentioned.  Friendship? They were rivals, and then didn’t see each other for half the book. So what was it? I honestly had no clue. Besides that, after the mentor figure ”dies” I could see exactly how the story was going to play out and I got bored.

I think the idea behind Scythe could have been very interesting, and I didn’t have anything against the actual prose of the story. I just found this book wasn’t for me. So I gave it 2 stars on Goodreads.

Goodreads Synopsis: Hunter and Van become boyfriends before they’re even teenagers, and stay a couple even when adolescence intervenes. But in high school, conflict arises — mostly because Hunter is much more comfortable with the sex part of sexual identity. As the two boys start to realize that loving someone doesn’t guarantee they will always be with you, they find out more about their own identities — with Hunter striking out on his own while Van begins to understand his own asexuality.

I wanted to like this book, but there were multiple problems with it. First off I should say that a number of people have found this book to be acephobic, you can find a really great review about why here. I don’t have much to add to this topic, their points are valid, though I don’t think the author intended to be acephobic, this book could definitely use a major rewrite.

Besides that first obvious problem, I didn’t at all like the poetry. What is it with all these people trying to write poetry novels? Because it’s really not working for most of them. Again, this was a book that should have been in prose. The poetry was not poetry. It was a novel cut up and formatted to look like poetry and nothing else.

It was also massively confusing to read because the only notice of a POV change (which happened at least every other page) was font change. No header to give us a clue, no name on the top. You had to remember which font someone was talking in. You could start to remember who was who, but then half way through the story a third POV was added! This was such a bad idea.  In the end I didn’t like the story, characters or style. I gave it 2 stars on Goodreads.

Wires And Nerves – By  Marissa Meyer:

Goodreads Synopsis: When rogue packs of wolf-hybrid soldiers threaten the tenuous peace alliance between Earth and Luna, Iko takes it upon herself to hunt down the soldiers’ leader. She is soon working with a handsome royal guard who forces her to question everything she knows about love, loyalty, and her own humanity. With appearances by Cinder and the rest of the Rampion crew, this is a must-have for fans of the series.

Though I wasn’t a fan of the original series, I did think Iko was one of the best characters, that combined with the fact that this is a graphic novel made up my reasons for reading it.

I found it amusing to note that the crew of the Rampion looked strikingly similar to the crew of Serenity from Firefly.  Tell me you can’t see it too? 😀 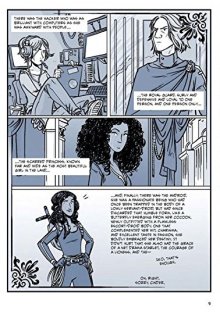 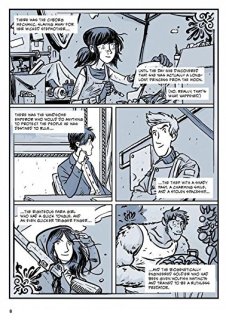 Anyway, I never really cared much about the story. It all felt like a lot of fluff, which isn’t bad, don’t get me wrong, it’s just not my thing and I was bored. Iko travels around, saves the day. Whoopee. End of the story. I wasn’t a big fan of the art either, it wasn’t bad per say, I just like more color in graphic novels.  So that said, this book made it into my 2 star pile.