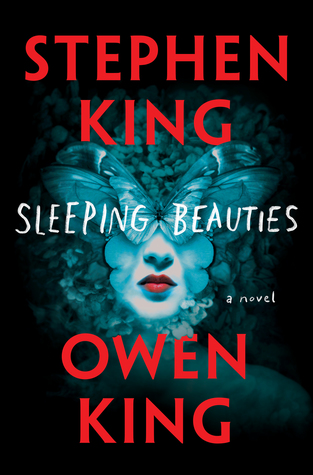 Goodreads Synopsis: In a future so real and near it might be now, something happens when women go to sleep; they become shrouded in a cocoon-like gauze. If they are awakened, if the gauze wrapping their bodies is disturbed or violated, the women become feral and spectacularly violent; and while they sleep they go to another place. The men of our world are abandoned, left to their increasingly primal devices. One woman, however, the mysterious Evie, is immune to the blessing or curse of the sleeping disease. Is Evie a medical anomaly to be studied, or is she a demon who must be slain?

If you’re asking if this is another 2017 Goodreads Choice Awards book, then the answer is yes. Yes it is. 😀

This book is actually my first fiction reading of a Stephen King book, and I was a little bit nervous that the horror would be too much for me.  Because of my anxiety I don’t deal well with really scary novels or games or tv shows.  But actually I think that Sleeping Beauties was a really great place for me to start.  The one downside was that this book is 702 pages, which was just a little daunting.

There are a lot of characters in this story, and it took me about 100 pages to finally start remembering who was who and what they were doing. Once that happened the reading was much easier. I really liked the writing style and the choice of how to divide the chapters was interesting. Though I do have to say the long chapters did not help with feeling daunted by 702 pages of story.  One of the things I like about the Game of Thrones series is that even though the books are around 900 pages each, the chapters are really manageable and that helps me to feel like I’m making progress.  That was not the case with Sleeping Beauties.

For me, this book was never scary. Which was nice for my anxiety, and also a tad disappointing, I mean the book won for best Horror in 2017, but I never felt horrified. A lot of weird things happened, a lot of bad people did terrible things, but I never found myself too disturbed by the story. The one thing I did feel consistently in the story was a lot of anger towards cis men, but then that’s nothing new for this year. 😛 Still I enjoyed the read a lot.   Especially the ending.  Without spoiling too much I’ll just say that it’s one of those endings where some characters are happy and some are not and it feels very realistic.

In the end I gave the book 4 stars on Goodreads and I’m looking forward to reading more books by Stephen King in the future.