1) Tell us a little bit about what you do.

Hi there creative people, I am primarily a stay at home mom and poet right now. I teach as an adjunct at the local community college and I am finishing an MFA in Poetry at Lindenwood University. I had my two little boys later in life, so I am functioning as a run-down, exhausted mom.  In the past I have been a waitress, a secretary, a UPS Christmas Elf, a horse trainer for a therapeutic riding program, and a brake lathe travelling saleswoman, in Mexico.

I have a lot of poems I don’t know where to send because they are too weird – too heavy duty.  I like to write about my own dysfunction, but I also like to try to live in others’ shoes and write about what things might be like for them. It’s a challenge. And it gives me an escape from my own mania for a bit.

2) When and why did you start writing?

I first wrote poems as an twenty-something angsty college student dealing with massive anxiety. I always liked the way my voice sounded in poems, but I had no skills, and because I was an American Literature major back in college, I never followed the poetry where it was trying to lead me.

After I had my sons, I fell into a massive postpartum depression. I think I have lived with depression and anxiety my whole adult life, but, as a new mom with two little babies, I really fell off the deep end. Plus, with children, I couldn’t self medicate my pain, which had always been my M.O. : to drink it away, and use my go-to self-destructive tactics which I had always done before.

If you had asked me when I was thirty where I saw myself in 5-10 years, I would have told you… dead. I was drinking myself to death. I hated myself.  But then, when you have kids, something snaps – oh wait – I can’t destroy myself – other people need me. I have to survive. I have to get better. I have to be a mom. This is my long winded way of telling you how I started writing. In my five year effort to survive the depression, I did therapy, took a bagful of different meds, was pressured to do ECT, and started an online masters degree at Southern New Hampshire University. It changed my life. I took a poetry class, and my professor, the most beautiful poet woman, Chrys Tobey, Chrys’s site, told me I had a voice. I started using it. It because my therapy. It became a way I could let other moms suffering from soul crushing depression know, that they were not alone. I wanted to change the way the world views people with mental illness.  That is still my goal.

If you are out there, alone and in pain – reach out to me, to others who give a shit. You can survive this. You are not alone and you are not a bad person. You have an illness, and it is possible to get better, even if it doesn’t seem that way right now. I am proof that people do get better, if they don’t give up. 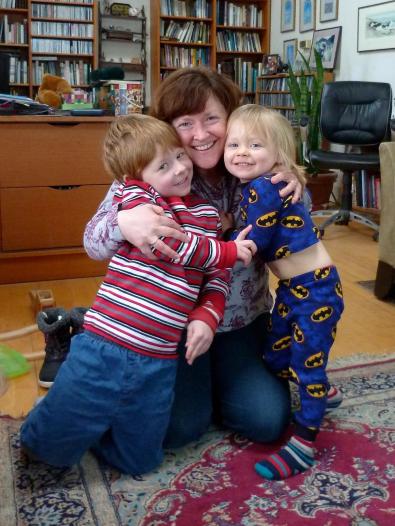 3) Tell us about a project that you are currently working on that has you really excited.

One of the first editors who took a chance on my work is James Diaz of Anti-Heroin Chic. On a brave whim, I asked him if he would want to write something together and miraculously, he said yes. We have now written five full manuscripts together, and several other chapbooks. I so want one of them to find a home. They are so honest, so aching, so fucking – real. They aren’t like anything else. We feed off each other’s words and it is like such a rush. Closest I can get to self-medicating these days –  My favorite one is about living with mental illness and being committed to a mental ward. It is all based on reality, and it kicks some serious ass while eating through your heart.

This year, I have reached out to collaborate with other talented poets – a group of super talented poet women and I wrote a chapbook together entitled “On This Path We Travel”, about feminism and nature. It is coming out at Moonchild Magazine this March. Next month! OMG, so exciting.

I also have a chapbook entitled Pensacola Girls, written in tandem with the incomparable Kristin Garth. It is about abuse. Sexual and domestic. It is hard core honest, pain filled, yet gorgeous and empathetic. It is us. It wants a home. 🙂

4) What are some of your goals for the future?

I think it is so important to reach out as a poet and not isolate yourself. I have dealt with some major social isolation and in the past it has always been easier for me to withdraw and assume the rest of the world hated me.  This behavior however, does not help me nor does it help other writers –

When I am brave and reach out to other poets, either to compliment their work, or ask them to collaborate, it always ends up being a positive thing. We can change each other’s lives by simply reaching out – by asking someone, how are you doing? It may turn out you save someone’s life, just by checking on them. All it takes is a tweet or an email to pull someone back from the brink of loneliness – from the wilderness of self-doubt and  despair.  Think of the power this gives us – if we give a piece of ourselves, to each other –

I often feel powerless to change the world but it isn’t true. We can change the world by being kind to each other. Kindness and love grows, organically, one gesture at a time. My goal is to be as open and unafraid as I am capable of. That is the power I have to make things just a little bit better, and I intend to keep using it. As long as that shit-head depression doesn’t sneak back up on me… so if you haven’t heard from me in a while, knock on my door – I may need a smile.

You can find out more about Elizabeth by checking out her blog, or following her on twitter.