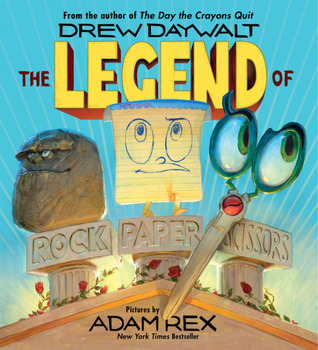 Goodreads Synopsis: You’ve played the game. Now read the legend of how it all began . . .

Long ago, in an ancient and distant realm called the Kingdom of Backyard, there lived a warrior named ROCK.

Meanwhile in the Empire of Mom’s Home Office, a second great warrior sought the glory of battle. And his name was PAPER.

At the same time, in the Kitchen Realm, in the tiny village of Junk Drawer, lived a third warrior. They called her SCISSORS.

These three were the strongest, smartest, and fastest in all the land. Time and again they beat the most fearsome opponents they could find: an apricot, a computer printer—even frozen, breaded, dinosaur-shaped chicken nuggets! But when the warriors finally meet each other, the most epic round of battles begins . . . and never ends. That is why, to this day, children around the world honor these worthy adversaries by playing ROCK, PAPER, SCISSORS!

In the continuation of curating a library for my future children, I decided to read this book. I found it off of the 2017 Goodreads Choice Awards list.

What I look for in kid’s lit are a few things. First I want the art to be engaging and beautiful, I want it to make me think of other stories and worlds and fully draw me into the world of the story.  Second I want the book to be something I wouldn’t mind re-reading again and again. We’ve all had those kids who just want you to read the same book over and over, so if it’s a book that I wouldn’t mind doing that with that’s huge. And third I want some sort of a message, I hate to use the word moral but that’s basically what I mean.  I don’t mean this in a religious sense at all, I simply want the book to make a point.

So with The Legend of Rock Paper Scissors I didn’t find what I was looking for. First the art wasn’t pretty, it was loud and a little more cartooning than I wanted.  Which would have been fine save that the story it’s self wasn’t that great. It would be super annoying to read over and over again, I would just get so tired of it. I have a feeling that there was a point to the story, because it’s a kid’s book and that’s what most of them have, but I can’t remember it at the moment.

In the end this just wasn’t the book for me. I gave it 2 stars on Goodreads.

Goodreads Synopsis: One eye was bigger than the other. That was a mistake.
The weird frog-cat-cow thing? It made an excellent bush.
And the inky smudges… they look as if they were always meant to be leaves floating gently across the sky.

As one artist incorporates accidental splotches, spots, and misshapen things into her art, she transforms her piece in quirky and unexpected ways, taking readers on a journey through her process. Told in minimal, playful text, this story shows readers that even the biggest “mistakes” can be the source of the brightest ideas — and that, at the end of the day, we are all works in progress, too.

I was fairly sure I would like this book, just from the cover because it has a really whimsical cover and I’m a sucker for whimsy.

The Book of Mistakes is a fun read, the art jumps off of each page and it’s amazing to see how it all connects and how ”mistakes” turn into something fantastic. It also has a great message about seeing the bigger picture. I really liked the author’s way of explaining how mistakes can turn into something else, something better.