Today I’m writing a post about the food that I cooked for Grant and I’s 4th anniversary that happened earlier in the week.  Hope you all enjoy and maybe find something you’d like to cook!

So for this meal I decided to make a couple of different dishes. You can find all the recipes below. I find a lot of my recipes from pinterest, even though I enjoy cookbooks I actually don’t own many of them right now and so usually stick to finding stuff off the interest. If you want to see more of what I like check out my pinterest food board.

The first dish I prepared was the slow cooker pork. Grant is a big meat eater so I usually cook this as a main dish. I’m quite fond of pork as well and this recipe seemed like it would be good for both of us. It’s called Sweet and Spicy Brown Sugar Pork. My version of this ended up not being spicy because I wasn’t cooking as much pork and I wasn’t sure how much of each seasoning I wanted to add, so I went with less. But if I were to make this again (which I think I will!) I would definitely add more cayenne because I love spicy food! 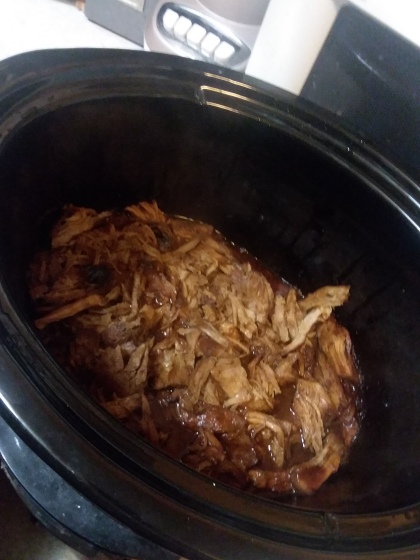 Around the time that my pork was finishing up I made buns for it.  Forgive my messy stove, I did a lot of cooking that day. 😀 I used this really easy 40 minute hamburger bun recipe. I use this ALL. THE. TIME. It’s the best because they turn out so yummy each time and it only takes 40 minutes! 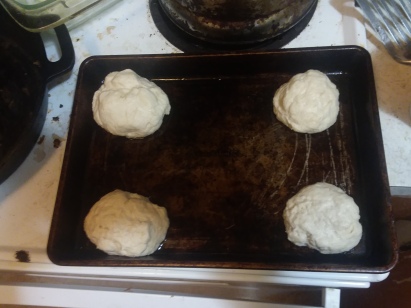 Next I made a recipe called Crispy Potato Stacks. You can find the recipe here. I really liked that this recipe could be cooked in a muffin tin, it seemed really fun and easy and it was! I would totally make these again for a breakfast on the go. You can see that I did change this up a little, I used bacon instead of the recommended meat because bacon was the stuff that I had on hand.

I don’t have a picture for these, because I forgot in the flurry of cooking. But I also made some glazed brown sugar and garlic carrots. I don’t have a recipe for this, I just took inspiration from ideas I saw on pintest for maple glazed carrots and added stuff I had around the house.

And last but not least I also made some baked onions with cheese. This turned out pretty good, I only had cheddar and swiss cheese on hand so I used a little of both. Next time I’d love to try out some Asiago cheese with this dish.

All in all I count this dinner as a success! Here’s the finished picture. So much cheese!

New favorite: Tofu Korean Tacos
Lit classes pro: All the fun books! Lit Classes con: constant essays. 😂 What were/are your favorite things about school? #essaysfordays
Best thing about classes this term is I get to read and analyze comic books!