The Wicked Deep, Rule & Aru Shah and The End of Time 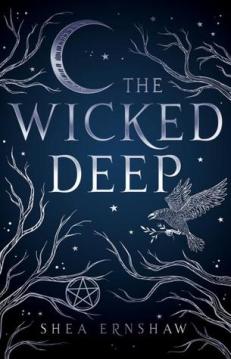 The Wicked Deep – By Shea Ernshaw

Goodreads Synopsis: Welcome to the cursed town of Sparrow…

Where, two centuries ago, three sisters were sentenced to death for witchery. Stones were tied to their ankles and they were drowned in the deep waters surrounding the town.

Now, for a brief time each summer, the sisters return, stealing the bodies of three weak-hearted girls so that they may seek their revenge, luring boys into the harbor and pulling them under.

Like many locals, seventeen-year-old Penny Talbot has accepted the fate of the town. But this year, on the eve of the sisters’ return, a boy named Bo Carter arrives; unaware of the danger he has just stumbled into.

Mistrust and lies spread quickly through the salty, rain-soaked streets. The townspeople turn against one another. Penny and Bo suspect each other of hiding secrets. And death comes swiftly to those who cannot resist the call of the sisters.

But only Penny sees what others cannot. And she will be forced to choose: save Bo, or save herself.

I can’t remember why I decided to read this book, but whatever the reason was I had a copy and I gave it a try.

I did not finish this book sadly, I wasn’t able to connect with the characters. The writing style wasn’t bad but Penny’s character was pretty dull. And the instalove between her and Bo was so annoying.

I wish the story had been more about the Swan sisters, because it would have been a much better story. I think the author did a good job with atmosphere, and if she ever wrote a prequel to this book I would read it in a heartbeat.

In the end I gave this book 1 star.

Goodreads Synopsis: The king is dying, his heir has just been murdered, and rebellion brews in the east. But the kingdom of Kolonya and the outer Reaches has one last option before it descends into leaderless chaos.

Or rather, three unexpected options.

Zofi has spent her entire life trekking through the outer Reaches with her band of Travelers. She would do anything to protect the band, her family. But no one can ever find out how far she’s already gone.

Akeylah was raised in the Eastern Reach, surrounded by whispers of rebellion and abused by her father. Desperate to escape, she makes a decision that threatens the whole kingdom.

Ren grew up in Kolonya, serving as a lady’s maid and scheming her way out of the servants’ chambers. But one such plot could get her hung for treason if anyone ever discovers what she’s done.

When the king summons the girls, they arrive expecting arrest or even execution. Instead they learn the truth: they are his illegitimate daughters, and one must become his new heir. But someone in Kolonya knows their secrets, and that someone will stop at nothing to keep the sisters from their destiny… to rule.

Magic, mystery, and blackmail abound in this sensational and striking fantasy debut.

I was given an ARC of this book by NetGalley in exchange for an honest review. I picked up this book because it reminded me of Three Dark Crowns, and I was hoping that it book would be better.

I had a little bit of a hard time getting in Rule at first. The story jumps around from all three sister’s povs, but inconsistently which is a big pet peeve of mine. I also found myself confused by some details, still the world was interesting and the writing style was pretty good. Also early on we learn that Akeylah is a lesbian, which made me interested to know what happened to her.

I admit I almost gave up on this book, but then the author kept having really great twists in the story and I couldn’t stop reading. And the longer I stayed with the book the more I found myself caring what happened to the sisters. I love that they became friends and started to work together. I couldn’t figure out who was threatening them and I had so many guesses.

In the end I couldn’t put the book down and now I’m eagerly waiting for the second book. I gave this book 4 stars on Goodreads and I think you all should give it a try!

Aru Shah and the End of Time – By Roshani Chokshi

Goodreads Synopsis: Twelve-year-old Aru Shah has a tendency to stretch the truth in order to fit in at school. While her classmates are jetting off to family vacations in exotic locales, she’ll be spending her autumn break at home, in the Museum of Ancient Indian Art and Culture, waiting for her mom to return from her latest archeological trip. Is it any wonder that Aru makes up stories about being royalty, traveling to Paris, and having a chauffeur?

One day, three schoolmates show up at Aru’s doorstep to catch her in a lie. They don’t believe her claim that the museum’s Lamp of Bharata is cursed, and they dare Aru to prove it. Just a quick light, Aru thinks. Then she can get herself out of this mess and never ever fib again.

But lighting the lamp has dire consequences. She unwittingly frees the Sleeper, an ancient demon whose duty it is to awaken the God of Destruction. Her classmates and beloved mother are frozen in time, and it’s up to Aru to save them.

The only way to stop the demon is to find the reincarnations of the five legendary Pandava brothers, protagonists of the Hindu epic poem, the Mahabharata, and journey through the Kingdom of Death. But how is one girl in Spider-Man pajamas supposed to do all that?

My review for this book will be fairly short, as I didn’t end up finishing the book but I still think other people could enjoy it.

While Aru Shah and the End of the World is a great idea and I was fascinated by the mythology, I just really disliked the writing style. It felt jerky and like two different styles mashed together. At times I would get into the story when I could really feel Chokshi’s style, and then everything would change and it would feel too much like a Riordan imitation. And it would pull me out of the story every time.

That said, I would rather that other people gave the book a try for themselves. I think it’s important for POC to write about their mythology and I really wish I would have enjoyed this book more.

I gave this book 3 stars on Goodreads.