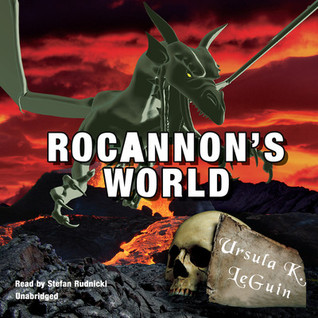 Goodreads Synopsis: A world shared by three native humanoid races – the cavern-dwelling Gdemiar, elvish Fiia, and warrior clan, Liuar – is suddenly invaded and conquered by a fleet of ships from the stars. Earth scientist Rocannon is on that world, and he sees his friends murdered and his spaceship destroyed. Marooned among alien peoples, he leads the battle to free this new world – and finds that legends grow around him even as he fights.

This book was my first experience reading anything by Ursula K. LeGuin, but I had heard a lot about her from others and I was pretty excited to start this book.

I actually listened to this book on audio, which was a great choice for me. I really liked the narrator, though I found his voice hard to get into at first, and it allowed me to sit back and crochet while I listened.

Rocannon’s World is a fascinating story. I wasn’t sure what to expect from it and the whole story surprised me in the best ways. I loved the blending of fantasy and sci-fi, and the way that the characters went on a quest but that the world was so different from other quest driven stories. At first I found the characters hard to relate to, but by the end I loved Rocannon and was sad to see his story end.

As soon as I finished this book I knew I had to get the next in LeGuin’s series. I was hooked by her style and world and wanted to read more. I gave this book four stars on Goodreads.