Weekend Cooking is a weekend blog meme hosted by Beth Fish Reads. This week I’m sharing an easy veggie ramen recipe I tried out. I got the idea from several videos on pinterest, but didn’t actually use one while I was cooking, going from what I remembered instead. Hope you enjoy! 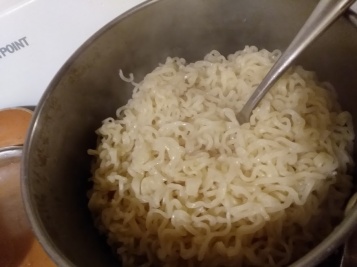 I had a lot of fun with this recipe. For the soup part of the recipe I used a bone broth I had just finished making and then added ponzu, ginger and miso to flavor it. For the noodles I just went with packaged ramen because I was in a hurry at WinCo when I went shopping. Still the noodles turned out fine and were the easiest part of the whole thing.

I made various toppings. Cut carrots into matchsticks, steamed some broccoli, heated up corn, cut up green onions and also cooked mushrooms and garlic in sesame oil.

I let my family add what veggies they wanted and we went from there. It was an instant hit so I’ll definitely be adding it to my list of dishes I make frequently. I’m excited to play around with it and try other things.