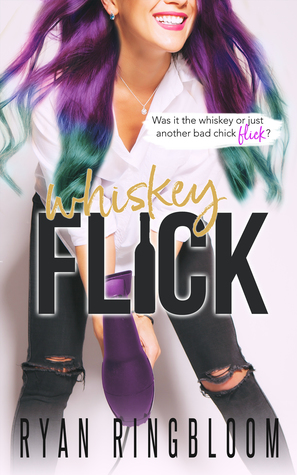 Goodreads Synopsis: Was it the whiskey or just another bad chick flick?

Everything usually goes my way. Life’s good. But after a bad breakup, a big secret unfolds that no one can ever know.

​She has a secret all right. Sure, I’ll keep it. Just because we can’t tell anyone doesn’t mean we can’t make it work.

But maybe some secrets do need to
come out?

Get ready to laugh, cringe and swoon as these two women get caught on film, landing them in a FLICKy situation in this lovable romantic comedy.
​
This is a stand-alone F/F romance intended for mature readers.

Find on Goodreads and NetGalley.

I will pretty much read anything if it has queer characters, so I was excited to take a stab at this book when I got it from NetGalley.  However Whiskey Flick ended up not being for me.

From poor writing, to repetitive storylines, inconsistent POV changes and two dimensional characters… Pretty much everything about this story bugged the hell out of me. Jenn was the most annoying character. I hate characters who ruin their lives because they just can’t make themselves communicate with family and friends. And I know this is realistic, but it’s still a trope that makes me want to throw a book away every single time.

On top of all that I just didn’t buy the romance. While I appreciate straight romance authors trying to be more diverse, you really need to hire editors or sensitivity readers. It will make your story and characters far more authentic.

So yeah, overall meh story. I skimmed a lot of it and gave it two stars on Goodreads.