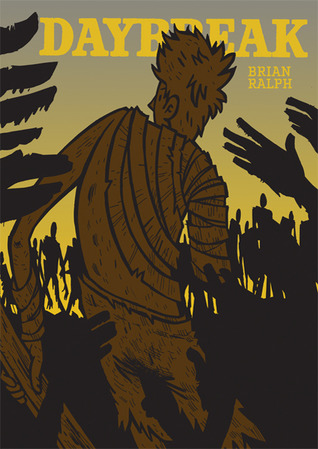 Goodreads Synopsis: You wake up in the rubble and see a ragged, desperate one-armed man greeting you. He takes you underground to a safe space, feeds you, offers you a place to sleep, and then announces that he’ll take the first watch. It’s not long before the peril of the jagged landscape has located you and your newfound protector and is scratching at the door.

What transpires is a moment-to-moment struggle for survival – The Road meets Dawn of the Dead. Daybreak is seen through the eyes of a silent observer as he follows his protector and runs from the shadows of the imminent zombie threat. Brian Ralph slowly builds the tension of the zombies on the periphery, letting the threat—rather than the actual carnage—be the driving force. The postapocalyptic backdrop features tangles of rocks, lumber, I-beams, and overturned cars that are characters in and of themselves.

Find on Goodreads and Book Depository.

I picked up this comic at random one day because apocalypse stories always intrigue me, and the only other zombie comic series I’d read was of course The Walking Dead, and I wanted to see how this would compare.

I thoroughly enjoyed this comic. From the color scheme, variations of brown, white and cream, to the way the story is told. I was surprised at how much I enjoyed the art work, considering how basic and drab the colors could be. But I think that they really provided a great backdrop to the story because they were so simple.  I was sucked into the the world and the story.  It’s interesting because we the readers are the main character of the story,  and the other main character being the man you meet at the start.  With no name, this man talks to you and befriends you as you both try to survive in this post apocalyptic world.  He tells you his life story and I was able to empathize with him from the start.

Daybreak is quick read, and I recommend it to you all wholeheartedly. I wish the comic had been longer! If you like zombie stories and/or comics this is the book for you. I gave this comic 4 stars on Goodreads.